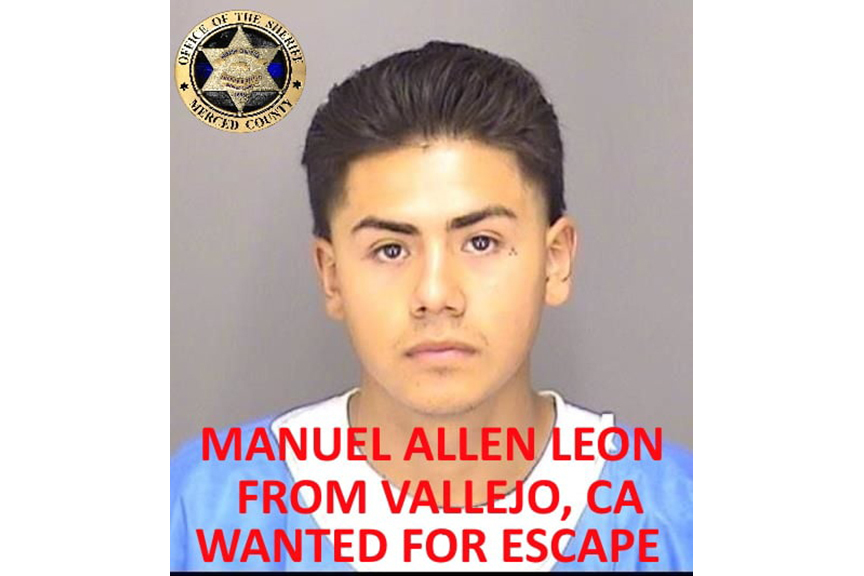 MERCED — Authorities in central California were searching Sunday for six inmates who used a “homemade rope” to escape from a county jail, sheriff’s officials said.

One of those escaped inmates was Manuel Allen Leon, 21, of Vallejo. Leon is charged with assault with a firearm, shooting at an inhabited dwelling, reckless driving to evade an officer, being a felon in possession of a firearm and violation of probation.

All six escapees should be considered armed and dangerous, the Merced County Sheriff’s Office said in a news release.

“A preliminary investigation has determined that the inmates were able to gain access to the roof of the facility and utilize a homemade rope to scale down the side of the jail,” the sheriff’s office said.

Anyone who spots the fugitives is asked not to approach them and immediately call 911.

All but one of the suspects are charged with violent felonies, including murder.

The others were identified as Jorge Barron, 20, of Atwater; Gabriel Francis Coronado, 19, of Atwater; Andres Nunez Rodriguez Jr., 21 of Planada; Fabian Cruz Roman, 22 of Los Banos; and Edgar Eduardo Ventura, 22 of Portland, Ore.

Roman is facing a murder charge. Coronado and Rodriguez Jr. face charges including attempted murder, shooting at an inhabited dwelling, participation in a criminal street gang and being a felon in possession of a firearm.

Ventura is charged with being a felon in possession of a firearm, participation in a criminal street gang and violation of probation.

The Times-Herald contributed to this report.