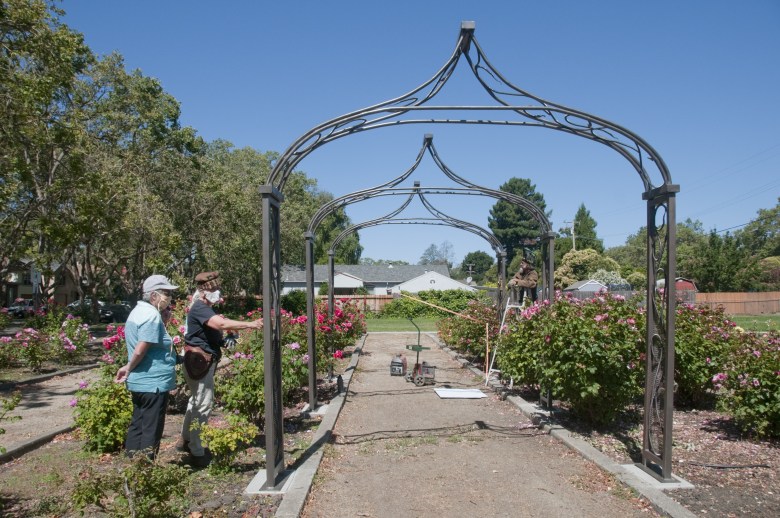 “Those who don’t pick roses in the summer don’t pick them in the winter either.”

There’s nothing like a good ol’ German proverb to kick-off the pruning season. And in sunny California, that means January. For the North Bay Rose Society, it’s this Saturday, with members nipping problems in the bud at Grant Mahony Park in Vallejo from 10 a.m. to 1 p.m.

It’s a site that long-time rose society board member Eileen Jackson hopes will eventually be a destination for tourists.

For now, it’s a serene respite for those needing an escape from life’s chaos. And it’s been improved, with an added two arches and two benches with an upgrade ahead, said board president Charlie Malarkey.

“Numerous roses are being replaced,” Malarkey said, with a grand opening “being contemplated for May or June.”

There are around 200 roses at Mahony Park and Jackson said another 50 to 70 would be ideal.

Before 2020, there were only “about 12” roses, “but none really survived because of the lack of irrigation,” Jackson said Wednesday. “We have resolved that by installing a brand new state-of-the-art irrigation system that the rose society has paid for.”

Mahony Park will be a destination, believed Jackson, “once the climbing roses climb over the arches and make a beautiful back drop for wedding photographs. Maybe by this summer if they grow well. If not, it will be next spring.”

But first, there’s Saturday’s pruning demonstration, with predicted sunshine and a mild 61 degrees, much to Malarkey’s joy, though “it’s pretty much rain or shine,” he said.

New members, potential members, and those just curious and want to learn about correct rose care are invited to the gathering.

Because there’s no worry about snow or torrential downpours, a January weekend has always worked out to be the ideal time for a pruning event.

“We’ve always done the demonstration and pruning in January and more people are available on the weekend,” Malarkey said, thrilled with the latest Mahony Park improvements, compliments of a “generous bequest” from Al and Greta Lange that “has given us the resources to replace roses and add benches and arches to the rose garden.”

“It’s our intention to try to create a peaceful and beautiful destination for everyone to come and enjoy,” Malarkey said.

Though the North Bay Rose Society is in its 41st year, there’s the constant challenge of getting into the eyes and ears of the public, Malarkey said.

“My intuition is that relatively few residents even know of our existence,” he said.

While the 35-member organization’s annual Spring Rose Show was canceled because of the pandemic, members have met monthly via Zoom or GoToMeeting on various rose-related topics, Malarkey said.