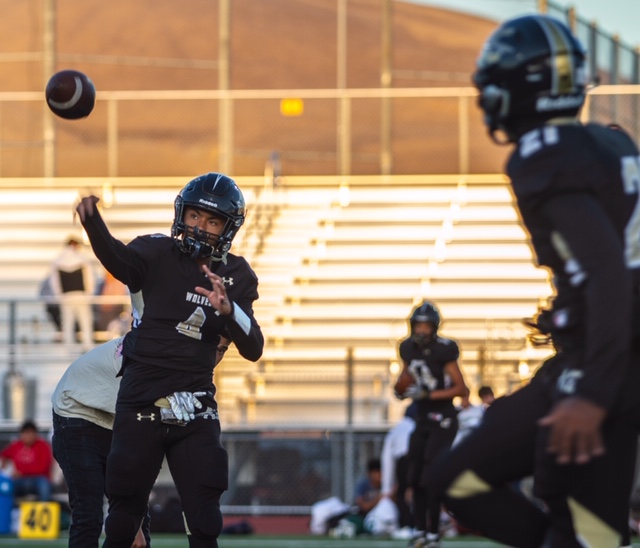 In October of last season, American Canyon High quarterback Vance Eschenburg was hurt in the first half and never returned against rival Napa.

Little was known of Vinnie Espejo, but the then-junior engineered two touchdown drives in the second half and the Wolves prevailed over their rival, 14-7. The win kept the Wolves in the thick of the league title race.

Esjejo now goes from supporting actor to the lead for the Wolves, who are still waiting for more California Interscholastic Federation direction to play a season in 2021. Prep football was postponed in the fall and then a Dec. 7 practice date was delayed as well.

Luckily for the Wolves, they held conditioning workouts throughout the fall and expect to resume those when school begins its second semester in about a week.

“The team went through a lot of adversity (during workouts), but I think it pushed us harder and brought us all together,” Espejo said. “Even though we were limited by six feet, we still communicated well.”

American Canyon head football coach John Montante is excited to see what Espejo can do on the football field.

“Vinnie looks really good,” Montante said. “He’s a kid who is very intelligent and very poised and calm. You tell him something once and he picks it up. The other guys really rally around him.”

“I learned a lot from Vance, and I helped him with a few things he didn’t know,” Espejo said. “One of the things he really helped me with last year was the playbook.”

Montante noted the effectiveness of the two quarterbacks.

“Vinnie is one of those guys who finds a way. That’s the best way I can describe him,” Montante said. “Him and Vance are different quarterbacks. Vance did things that kind of popped off the page. He is very athletic. Vinnie is athletic too, but it’s deceptive. He had this one incredible run against Napa where he checked his peripheral vision, pulled the ball down and took off.”

Besides the conditioning workouts, Espejo said he’s thrown the ball around to some of his receivers at local parks. He mentioned players like Jordan Fisher, Camren Lee and Mason Brodit as some of his top pass catchers.

Espejo, 17, said he really improved his leadership and communication with his teammates over the long offseason. He admitted “frustration” due to not knowing when — or if — his team will have a season. If the Wolves can play, they’ll be in a more wide open offense as opposed to the “Flex Bone” from a year ago.

“Being that it’s my senior year, we are all just waiting for the call to suit up together,” he said. “Eventually, you have to hang up your cleats but we hope we can still play. Right now I am just quarantining with my family.”

American Canyon has been in a hybrid model since October with some of the students on campus and others still distance learning from home. Espejo is one of a handful that is doing in-person learning. He said a few classes have about 10 to 12 students and others may only have three students at a time.

“I’d much rather be in a classroom than staring at a laptop all day,” he said.

Espejo plays baseball as well although football is now his top priority. He plays catcher and is a utility player for head coach Matt Brown. He got 10 at-bats last spring before the season was shuttered due to the pandemic.

With no film highlights to show for senior year so far, Espejo said he’s been applying to colleges on the West Coast but for academics first. Montante, however, believes Espejo can play football in college.

“I could see him being an NAIA or Division III quarterback,” the coach said. “He picks things up so quickly. He’s an athlete, he has a good work ethic and he’s a great student.”