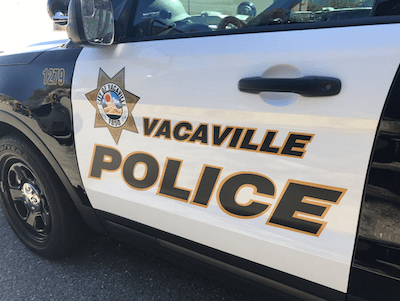 A Vacaville police officer and his canine partner have been separated as officials continue to investigate allegations that the officer abused the dog.

Chief John Carli on Thursday described the probe as thorough and complex.

“It’s not being swept under the rug,” he emphasized, adding that outside police K-9 experts are also reviewing the matter.  As well, the K-9 program itself, as well as related procedures and training, are also under review.

On Monday, police became aware of a video shot by resident Roberto Palomino, showing an officer straddling his dog, which was on its back, and punching it in its face.

The incident occurred just after 12:15 p.m. between two trailers at Fire Station 73 at Vaca Valley Parkway and Eubanks Drive.

Palomino was at his warehouse and was loading tools into his truck when he heard the dog cry out.

“It was crying like it was in pain, crying like someone ran over it or something,” he said.

The short video only shows the dog being struck once, but Palomino said it occurred at least 10 times before he began recording the incident with his phone. He said he was afraid to confront the officer so he filmed the incident instead and then posted it to social media. The video quickly went viral.

Vacaville police Capt. Matt Lydon has said the veteran officer and the dog are training to join the K-9 Unit and have been together about three to four months. They are not out on patrol.

During a narcotics search scenario, the dog successfully performed and was rewarded with its toy, he advised. When the handler eventually retrieved the toy the dog got angry, he continued, then lunged at the officer and tried to bite him.

That’s when the handler, per training, was required to swiftly rectify the situation and assert dominance, which straddling the dog does, Lydon explained.

Carli said everything from the handler’s frame of mind to the dog’s behavior is under review.

“We’re trying to understand what happened and, most importantly, why,” he shared.

As a former K-9 officer and unit supervisor, Carli said he “understands what it takes to have a disciplined partner out on the streets,” as well as the time and trust it takes to form a strong relationship.

Dog obedience is integral to a successful team, he emphasized, for the safety of all as a split second mistake on the part of the dog could be life changing.

The partners are so new that local and state certifications have yet to be attempted, the chief said, adding that best practices, including field training under the eye of an experienced handler, are in place once the trainees reach that step.

For now, the training for the unnamed officer and the dog have been suspended pending the investigation.

The dog has been checked out by a veterinarian and was found to be uninjured, Carli said. It has been placed indefinitely into the care of a professional trainer.

No word on the status of the officer.

“The future of this handler in the K-9 program is part of the investigation,” he said. Carli did describe the officer as level headed and a good decision maker.

“He is a highly-skilled veteran officer that raises no concerns,” he added.

The outcome of the investigation could result in discipline, further training, changes to policies and protocols as well as numerous other things.

Acknowledging that the video was disturbing, Carli said he will not rush to judgment and will instead wait for all of the facts to be revealed.

“We’re looking at everything,” he assured.

Anyone with information is asked to call the Vacaville Police Department at 449-5200.