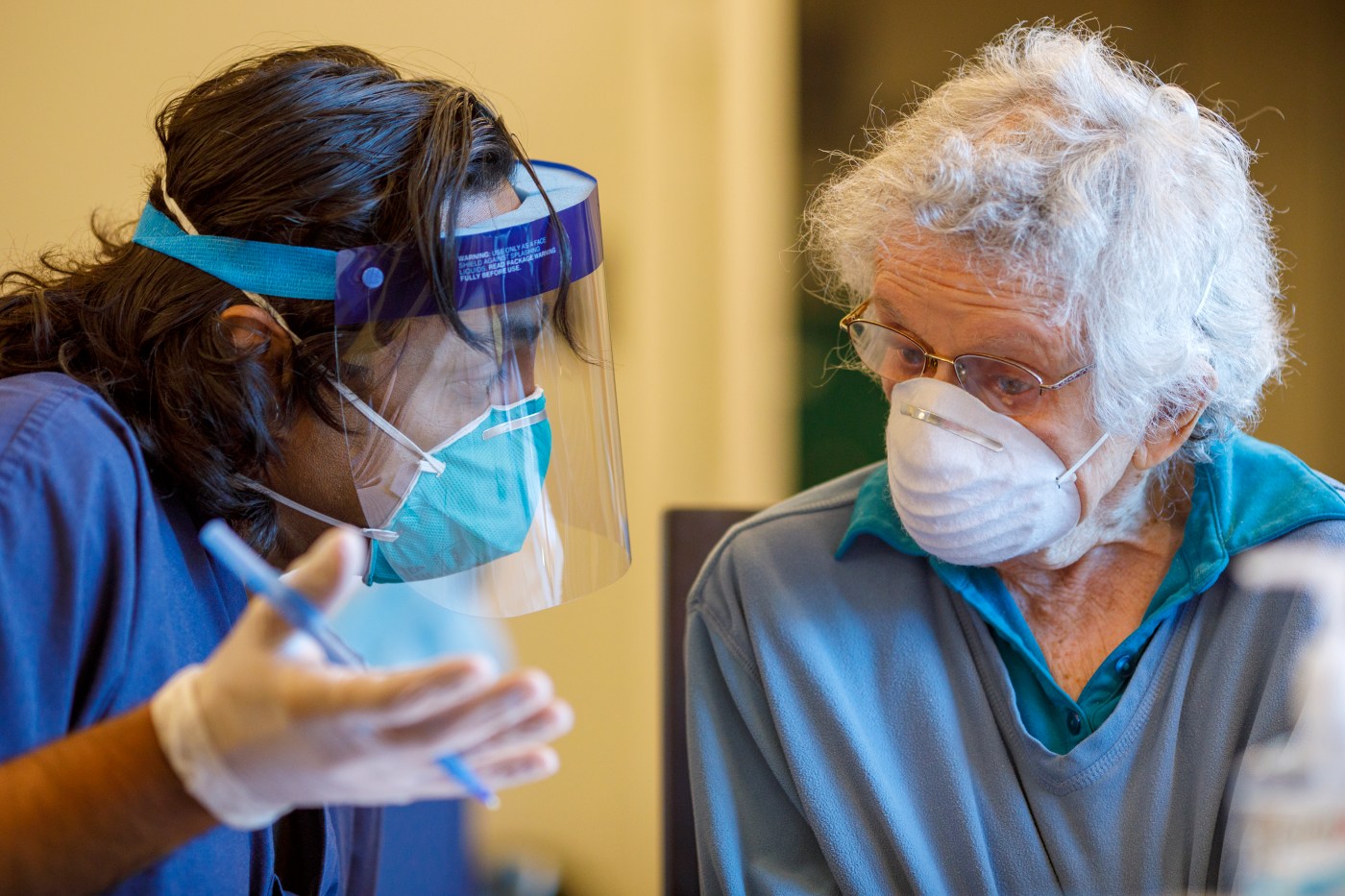 Elizabeth Thurstone was “elated” to be among the COVID-19 unit nurses at San Jose Regional Medical Center to receive her first dose of the Pfizer vaccine on Dec. 21, after 10 exhausting months of treating sick and dying coronavirus patients.

But Thurstone is under no illusion that the initial Bay Area rollout of vaccines to thousands of frontline medical workers means the pandemic will ease up anytime soon. The virus continues to rage in Santa Clara County and throughout the state, and the slow start of the largest immunization effort in American history has dimmed most health experts’ hopes of a return to a sense of normal until well into 2021.

“It’s a morale booster, and it does offer a feeling of added protection,” Thurstone said about getting the vaccine. But she expects a post-holiday surge of new COVID-19 patients. “I’m still swimming in a sea of coronavirus. With the vaccine, I just have a larger, more inflatable life jacket to keep me afloat.”

Three weeks into the COVID-19 vaccination campaign, reports about its progress range from dire to cautiously optimistic. The Trump administration said it would make available 20 million doses by the end of the year. Yet as of Wednesday morning, 12.4 million doses of the Pfizer and Moderna vaccines had been sent out across the country and just 2.7 million people in the United States had received their first dose, according to the Centers for Disease Control and Prevention. Dr. Anthony Fauci, director of the National Institute of Allergy and Infectious Diseases, warned this week that vaccines won’t be widely available to 330 million Americans until well into 2021, a delay expected to prolong a pandemic that has killed more than 336,000 people in the U.S., 25,400 in California and more than 2,500 in the Bay Area.

The slow pace of vaccinations in California seems to mirror the situation across the country, as states, counties and health providers are left largely on their own to figure out how to get the precious vaccine to the people who are first in line to receive it. Gov. Gavin Newsom on Wednesday said that 300,696 shots had been administered, out of approximately 1.2 million doses delivered by Pfizer and Moderna. Another 529,675 doses were expected to be delivered by the end of the week, Newsom said.

But the rollout hasn’t gone so quickly for nursing home residents and staff, who are included in the first critical phase of vaccine distribution but are supposed to receive their shots through a different pipeline. On Monday, the state announced it had joined the federal partnership with CVS and Walgreens to administer the Pfizer vaccine in nursing homes starting this week. But Los Angeles County announced earlier this month it would opt out of the federal partnership so it could get vaccines to residents and workers earlier and to have more flexibility in how they are administered.

Outside of Los Angeles, other counties have stepped up to get some elderly residents vaccinated before the CVS and Walgreens program begins, said Michael Wasserman, an immediate past president of the California Association of Long Term Care Medicine.

“My doctor told me I absolutely needed to take it,” said Stuhmiller, who has chronic lymphocytic leukemia.

Melody Mitchell, Viamonte’s executive director, said Walgreens had yet to schedule a date to vaccinate the facility’s more than 70 residents when the county called.

“We were very excited to get this surprise offer from the county on Monday, so we jumped on it,” she said.

To Wasserman and other nursing home advocates, this somewhat improvisational effort by counties to vaccinate at-risk seniors is one example of the “the complete failure” of the Trump administration to distribute vaccines. President-elect Joe Biden also criticized the outgoing president this week for leaving it to state and local governments to do all the heavy lifting when it comes to getting doses in people’s arms.

Despite the challenges, Bay Area hospital leaders are mostly pleased with efforts to vaccinate frontline workers who have direct or prolonged contact with COVID-positive patients.

More than 33,000 health care workers in Kaiser Permanente facilities across Northern California have received vaccines, as have 6,500 at UC San Francisco facilities in San Francisco and Oakland, and more than 11,000 at Stanford Medicine locations in Palo Alto and Pleasanton. John Muir Health has vaccinated more than 5,500 employees in the East Bay while Alameda County Health Care Services agency has vaccinated more than 3,000 people in six days.

“The amount of organization to get this done is extraordinary,” Desi Kotis, chief pharmacy executive at UCSF Health, said about ramping up to inoculate up to 5,000 people a day in the next few weeks. “This is a very choreographed dance.”

The choreography hasn’t always gone smoothly, even at a top medical center such as Stanford. The hospital came under fire in mid December when front-line residents and fellows were passed over initially in the hospital’s first wave of vaccinations while professors and others who do not treat patients were on the list. The university promised to change course, but this past Saturday, a “miscommunication” led to an unknown number non-clinical and non-frontline staff receiving the vaccine during walk-in appointments in the hospital’s atrium.

Dr. Robert Harrington, chair of the Department of Medicine at Stanford, said officials quickly corrected those issues after becoming aware of them.

“I think that this was a process that we all knew it was coming, and while plans were being designed, we didn’t then know we’d be launching a vaccine plan in the middle of what’s been the worst surge of the pandemic so far,” Harrington said. “We rapidly corrected (the issues). Over the course of mostly two weeks, things have gone exceptionally well.”