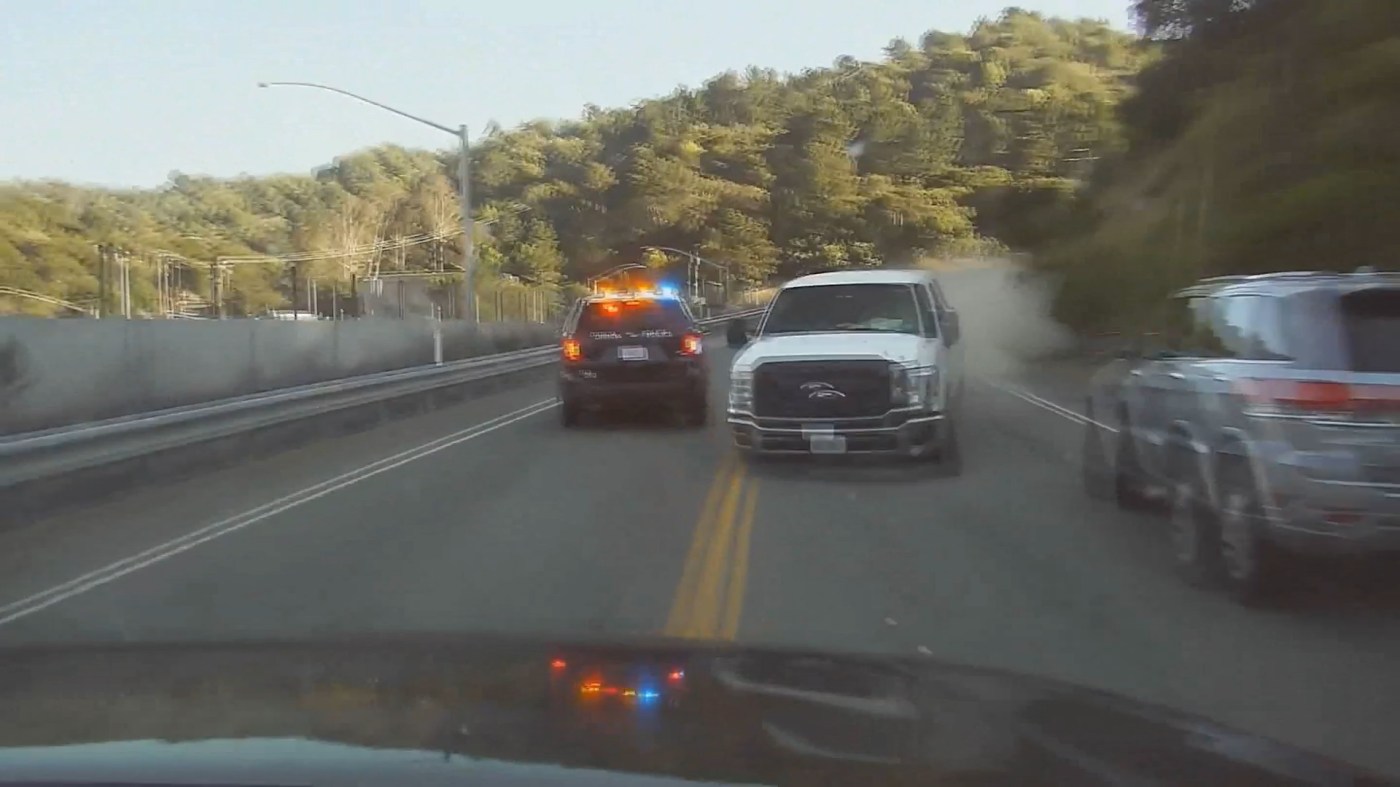 MARTINEZ — A 28-year-old East Bay man who was out on bail in a manslaughter case last June when he allegedly committed multiple carjackings, a kidnapping, head-on collided with a police SUV, and ran across multiple freeways — one after falling roughly 20 feet onto pavement and being hit by a car — is expected to stand trial early next year.

Victor Topete, of Pittsburg, is facing 15 felonies and three misdemeanor charges, all stemming from a two-day period last June when Topete allegedly led police on multiple chases across city streets and Bay Area freeways in an ultimately failed attempt to escape. During the ordeal, which started in Pittsburg and ended in Oakland, Topete allegedly told people he believed the pursuing officers wanted to hurt him.

The manhunt culminated on June 13, 2020, at Fish Ranch Road in Orinda, in an incident captured on multiple law enforcement videos that were recently obtained by this newspaper. Topete allegedly drove a Ford F250 he’d stolen from his dad into an SUV being driven by Lafayette Ofc. Kevin White, resulting in a head-on crash. Minutes earlier, the truck had been seen driving in the wrong direction on the shoulder of Highway 24.

“When you saw the white truck coming at you, what did you think? What was going through your head?” deputy district attorney Chris Sansoe asked White at a preliminary hearing in October.

“That I was going to get seriously injured,” replied White, who suffered a wound to his head but has recovered.

Instead of surrendering at that point, video shows the man identified as Topete exiting the car, hopping a short fence, and dropping an estimated 20 feet onto the pavement below, near the Contra Costa side of the Caldecott Tunnel entrance. There, he attempted to run across the freeway but was struck by an oncoming truck, which knocked him down. But he rose again and continued to dodge cars coming at him at freeway speeds.

After allegedly attempting to carjack one woman, Topete — wearing a neon green vest he allegedly swiped from his father’s truck — approached a white car and is seen on video speaking to the driver. Topete then goes around the side of the car, and the driver rolls his window down, allowing Topete to reach into the vehicle and unbuckle the man’s seatbelt, police said.

The man later told police he was confused and believed Topete was a roadway worker because of the vest, according to the testimony of Contra Costa Sheriff’s Dep. Anthony Paredes. By the time he realized that wasn’t the case and hit the case, it was too late; the man identified as Topete is seen on video wrapping his arms and legs around the door of the now-moving car, until the man slows down and gets out, later telling police he figured at that point the situation wasn’t worth dying over.

“The police are trying to hurt me. I need your car,” Topete allegedly told the man, Paredes said on the stand.

Topete then climbs into the car and drives off. He went through the tunnel and got on Highway 13. Once in Oakland, he exited the freeway, crossed on an overpass, and got on headed back toward Berkeley, but crashed his car while merging with traffic, police said. There, the man identified as Topete is seen on video exiting the stolen car and once again running across the freeway. This time, he gets across without being hit.

The chase ended soon after that. Police say Topete hid in a shack on a nearby water treatment facility, and that a Contra Costa Sheriff’s deputy sicced a K9 on him when he refused to come out. Prosecutors added a charge of attempting to injure a police animal because the deputy later said he witnessed Topete using his thumbs to try and gouge the dog’s eyes. Topete’s attorney argued at the preliminary hearing that his client was trying to get the dog to stop biting his leg.

The sequence of events leading up to the crash on Fish Ranch Road are responsible for several of the felony charges: Topete allegedly kidnapped a Pittsburg man — his friend — and stole his car after asking for a ride. Then he allegedly went to his parents’ house in Pittsburg, and took the truck, which had a Bobcat excavator or tractor attached on a trailer. Hours later, he allegedly led police on a chase through Concord city streets in the truck, but officers stopped the pursuit and let him get away because it looked like the excavator was going to break loose.

“I saw the tractor go left to right wobbling, that’s when I was like, ‘Enough is enough. There’s more value to life than chasing a stolen vehicle,’” Concord Ofc. Isidro Llanos testified at the preliminary hearing, according to the transcript.

At the time of the chase, Topete was out on bail in a manslaughter case in Fresno, stemming from an April arrest where he allegedly struck his 54-year-old neighbor during an argument. The man died from injuries sustained during the fight, according to the Fresno Bee.