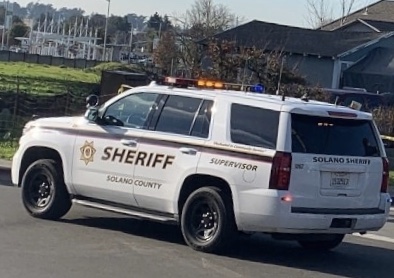 An Oakland man connected to crimes in Solano, Contra Costa and Alameda counties was arrested Wednesday in Berkeley by Solano County sheriff’s deputies.

Officials laid out a timeline of events:

Deputies issue an alert to Bay Area law enforcement agencies and receive a bulletin from the Pinole Police Department regarding a robbery suspect matching the description of the Bevbox robbery suspect. And, they learn that Oakland police are investigating the same man for robberies in their city.

Solano Sheriff’s Investigations Bureau and Sheriff’s Enforcement Team located the Johnson’s vehicle and tried to pull him over. Instead, officials said, Johnson rammed a marked Sheriff’s car before leading deputies on a chase throughout Solano, Contra Costa and Alameda counties.

California Highway Patrol officials via air and ground units joined the pursuit on Interstate 80, which ended at Ashby Avenue in Berkeley. That’s when Johnson jumped into San Francisco Bay before surrendering to CHP officers, officials said.

Solano deputies took Johnson into custody and reportedly found two loaded guns in the water where Johnson jumped in.

Johnson was determined to be involved in the Vallejo shooting, officials said, and was booked into jail on suspicion of numerous charges including attempted murder, accessory, robbery, felony evading, being a convicted felon in possession of a firearm, and assault with a deadly weapon. He was also booked on a no bail arrest warrant issued by Alameda County for domestic violence.

The matter remains under investigation.