The Humboldt-Del Norte Film Commission has good news for those of us who’ve burned through our streaming queues: Humboldt artist and author Daniel Niyiri’s thriller Confession is now available to stream on Amazon Prime. The drama centers on a forensic psychiatrist’s evaluation of a captured murderer who claims to be a demon. Check out the preview below for a sample of the spooky film. 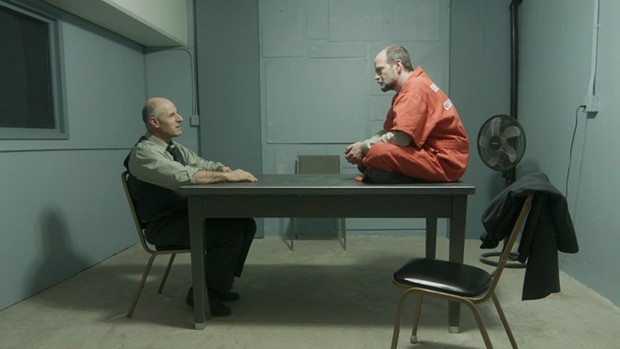 While Humboldt is disguised as a metropolitan city through some scrappy movie magic, you may recognize some familiar faces in both starring and supporting roles, including Charlie Heinberg, Gary C. Stillman, Queena DeLany, Gavin Lyall, Jo Kuzelka, Gary Sommers, James Hitchcock and Bailey Barnick. In the mix with our hometown talent is Tony-nominated actress Cynthia Martells (Nurse Betty, Gattaca, Regarding Henry). 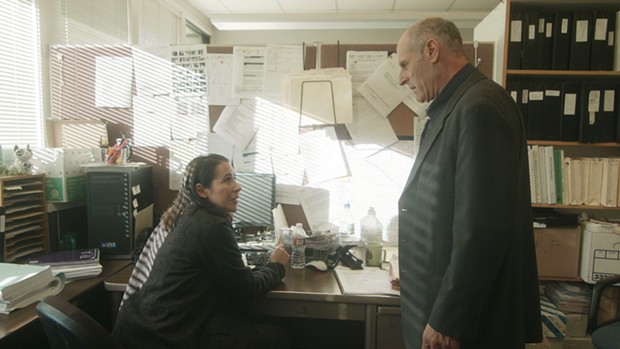 While the commission’s press release says the sets are mostly fabricated by Niyiri, whose extensive set design experience includes work at Redwood Curtain Theatre and Ferndale Repertory Theatre, some of the props were loaned by those theaters, as well as North Coast Repertory Theatre. 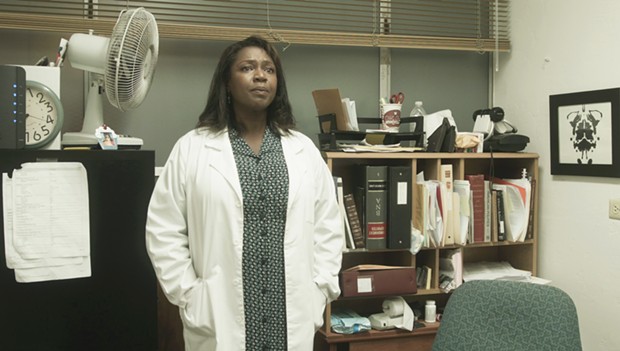 Another locally filmed movie just became available on Amazon Prime Video for streaming. “Confession”
was written, directed, and produced by local artist and author Daniel Nyiri. While filmed entirely in
Humboldt, the movie was made to suggest a much larger metropolitan area. Almost the entire cast and
crew was comprised of local residents, many of whom were new to the filmmaking process. Notable
locals include Cinematographer Matt St. Charles, whose work is recognizable for his numerous
commercials for Wildberries Market, Sole Savers, and the Minor Theater, and Editor Cole Saxton, who
received his BA in Film from Humboldt State University and has worked extensively editing three
features, documentaries, music videos and numerous TV advertisements as well.

The film is an intelligent thriller with deep metaphysical themes. After a gruesome multiple murder,
Dean McCallum, a seemingly good and decent man, walks into a cafe covered in blood. Brought in for
questioning by detectives Jared Lamb and Reina Herrera, who begin a series of interrogations to
determine if McCallum is a psychopath, serial killer or suffering from multiple personalities. He is further
evaluated by Forensic Psychiatrist Dr. Waverly, which proves to be an unsettling and disturbing
experience for her. McCallum’s increasingly bizarre and disquieting comments, his paranormal
awareness of things unknowable to him, and unexplainable peripheral occurrences, suggest there may
be otherworldly influences. Now they must determine if McCallum could be possessed by demons, be
the Devil himself, or if there is something even more shocking to consider. Once the truth is revealed,
everything they believe in will be questioned and the foundations of their very reality will be shaken.

Nyiri believed that he could maximize the limited local resources available to make a movie that would
provide the kind of challenging subject matter and fearlessness major studios are hesitant to tackle. Far
more ambitious than your usual “Cabin in the Woods” approach to a low budget first feature,
“Confession” required over 60 distinct locations and had 28 speaking parts. Unbelievably for the budget,
the majority of the settings were built completely from scratch or heavily modified, so that Nyiri could
maintain maximum control over the various visual elements. For example, one single location became
three different apartments in the film by adding and removing windows and walls, while large sections
of the film’s police station were actually constructed in an empty basement facility. This could be
accomplished on the highly restrictive budget because of Nyiri’s expertise as a scenic designer with over
150 productions to his credit; including 15 shows for Redwood Curtain Theater and 9 shows for

Ferndale Repertory Theater. Those theaters, along with NCRT, received special thanks in the closing
credits because of additional set materials loaned to the film, use of their spaces for the original
auditions, and the hosting of the cast and crew private screening. All of it evidences of the connection
between the local theater community and the filmmakers.

Attentive viewers will note many unfamiliar high-rise buildings appearing in shots, alongside the
humbler ones they are used to seeing around Eureka and McKinleyville. For one montage, a whole
series of religious structures were fabricated. All of these efforts were to give the impression of a much
larger, more metropolitan setting. Matte paintings and miniatures were also used to give the locations
more scale. Everything attests to the objective of creatingf a film which defies expectations as to what
can be accomplished on a limited budget. Nyiri has said, “Too often individuals settle for what is easiest.

This film shows what you can achieve, if compromise is not your instinctive first choice, and you have a
few people willing to put in the extra effort to go the distance.”

Many local actors were cast, including Gary C. Stillman, Queena DeLany, Gavin Lyall, Charlie Heinberg
(who portrays serial killer Holden Parks), Jo Kuzelka (as Heather Kadar), Gary Sommers (as the Coroner)
and James Hitchcock (as the Medical Examiner), as well as up and coming talents like Bailey Barnick,
who plays the key supporting role of Casey Emerson). The production was fortunate to attract the
participation of Tony-nominated actress Cynthia Martells, who played the difficult role of Dr. Waverly.
In addition to her role in August Wilson’s Broadway production of “Two Trains Running” (for which she
was nominated as Best Actress in a Featured Role for the 1992 Tony Award) she has appeared in “Nurse
Betty,” “Gattaca,” and “Regarding Henry” among her 38 film and television credits.