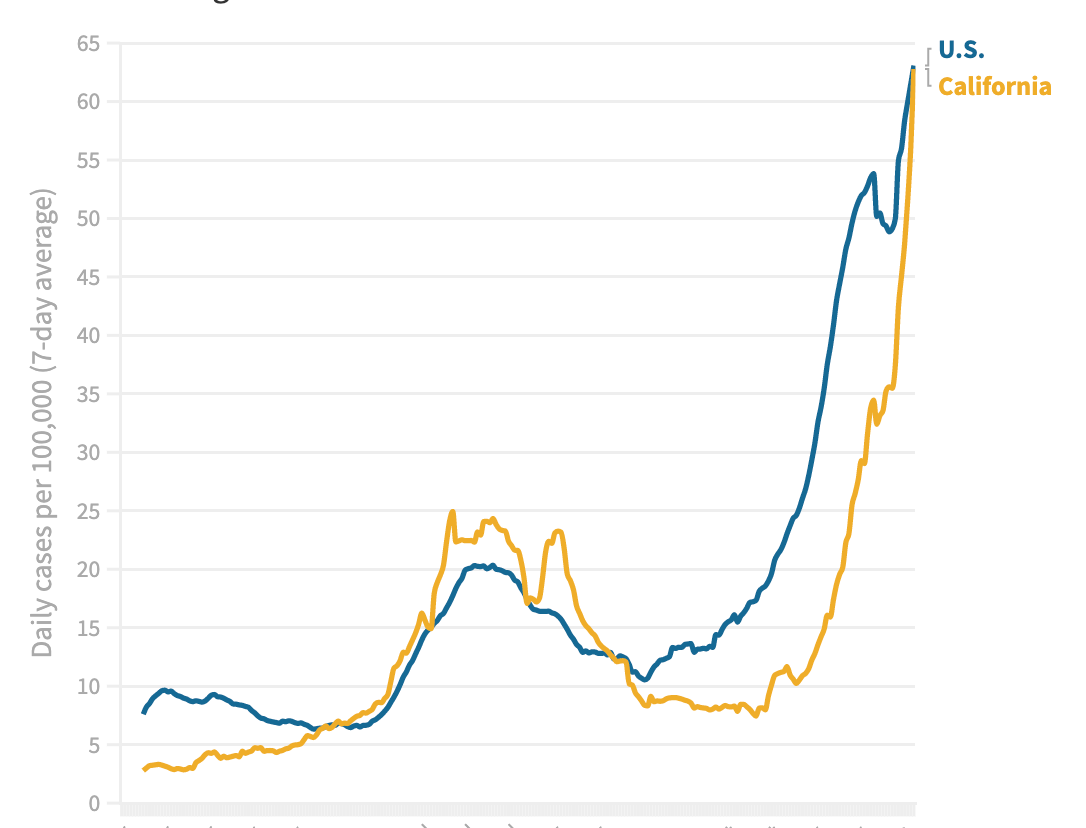 It wasn’t long ago that COVID-19 infections in California were coming at half the rate of the nation, per capita. Just flip the calendar back a month. Even this past weekend, we took note of California’s relative success in containing the virus compared to other states.

But just in the past few days, California’s case counts have exploded. Twenty thousand from a handful of counties Sunday. Thirty thousand each of the past two days. A daily average on pace to double in a span of nine days. As the surge here has grown larger, California’s infection rate has nearly pulled even with the national average, for the first time in more than three months.

The Golden State has now reported about 62.8 daily cases per 100,000 residents over the past week, a rounding error away from the national rate of 63.1 over that time. There are still 33 states with higher rates, but California is slowly climbing the list — its growth rate is outpacing the country as a whole, up 77% week-over-week vs. 28% nationally.

So, what the hell happened?

“I think that the reality is that it reflects a variety of forces at work,” said Dr. Arthur Reingold, an infectious diseases expert and the chair of epidemiology at UC Berkeley.

More people in California are getting tested for the virus than ever before. Over the past week, California has tested an average of nearly 250,000 people per day, a 25% increase from the previous week. More of those tests are also coming back positive: 10.1% of all tests in the past week, the state’s highest positivity rate since testing became widely available.

Although California ranks 17th in testing per capita, with about 630 daily tests per 100,000 residents, it is well ahead of the nation in its efforts to expand testing. While the U.S. is testing about 15% more than it was three weeks ago, California has increased its testing capacity by 45% in that time.

“Testing capacity has gone through the roof,” said Dr. George Rutherford, an infectious diseases expert at UC San Francisco. “I think some of it is just increased case finding. But, you know, at the end of the day, there’s just a s—load of cases.”

If those prove to be vectors of transmission, Gov. Gavin Newsom’s new stay-at-home order, which forces restaurants to close their patios in affected regions, could make an impact. State health officials have urged Californians to avoid gathering with people outside their household altogether.

But with multiple days of gobsmacking totals — and, experts believe, more to come — there are already tens of thousands of infections in the state playing out right now. Many will recover at home without incident. But even the small portion projected to arrive in hospitals around the state could push intensive care units over the edge.

There is one (relatively) bright spot: California has avoided the mass casualties seen early on in the pandemic and now again in the Midwest — its death rate, per capita, is still about half the national average. But health officials worry about a rapid increase in deaths as well, warning that the quality of care can slip quickly when hospital workers are overwhelmed by patients requiring serious attention.

In the past 72 hours, California has reported about 90,000 new cases of the virus. By state health officials’ estimates — that about 12% of cases require hospitalization and 20-30% of those end up in the ICU — that alone could mean an additional 10,000 hospitalizations and more than 2,000 new patients in ICUs in the coming weeks.

“I think that’s an intelligent and rational way of understanding things,” Reingold said. “Presumably (the stay-at-home orders) are not going to prevent further strain on the ICU and hospital beds in the next two to three weeks because they’re going to be reflecting infections that already occurred. But the hope is we’ll see the impact of them a couple weeks after that. … If the logic of all this is correct, then clearly it’s going to get worse.” And then, presumably, better again.

While we’re comparing states, here’s one more for the road: California is especially susceptible to hospital surges; only two states have fewer hospital beds per capita than we do.