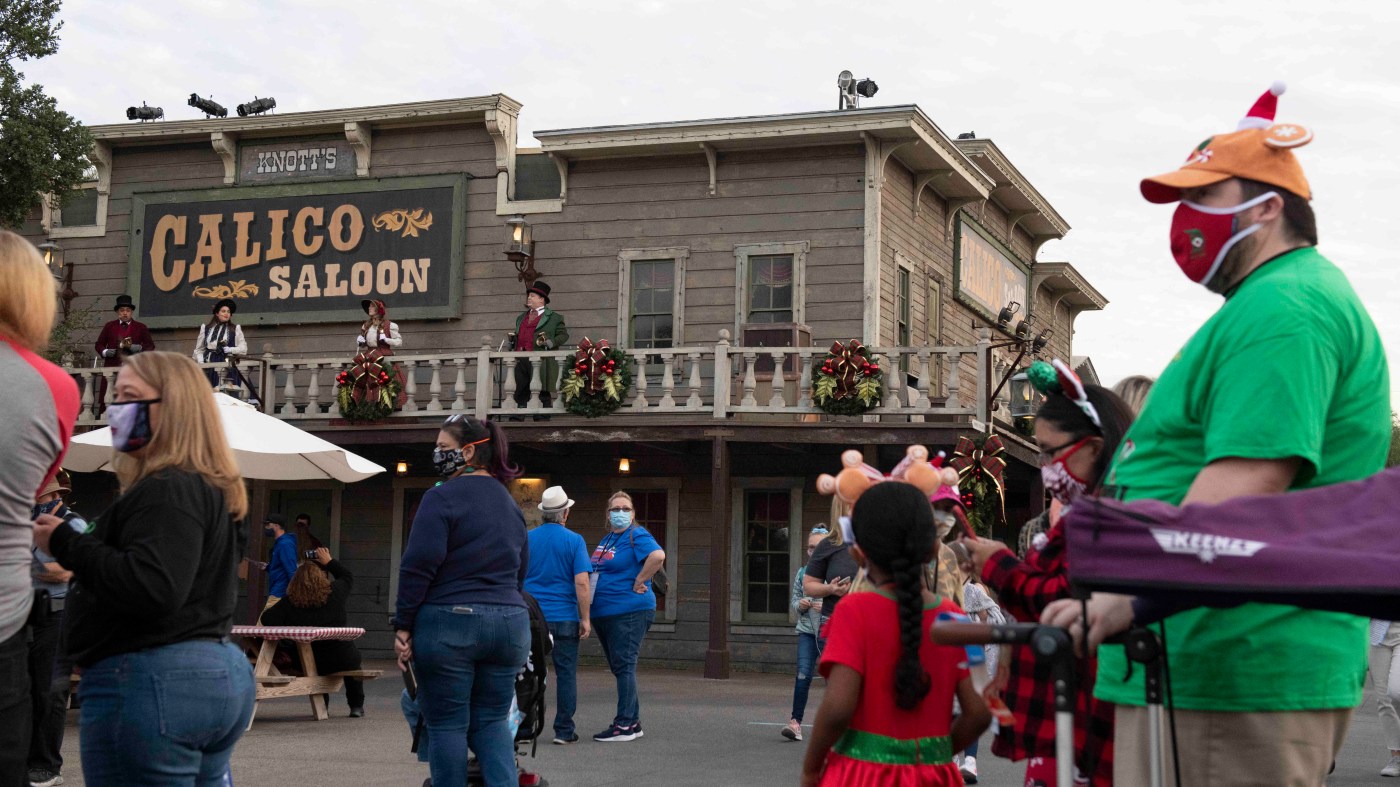 California’s impending stay-at-home order raises as many questions as it answers for Disneyland, Knott’s Berry Farm and other California theme parks that are already operating under state coronavirus restrictions that have kept the major tourist destinations closed for eight months.

California Gov. Gavin Newsom’s new stay-at-home order — which is expected to go into effect in the next few days throughout much of the state — limits restaurants to take-out or delivery, restricts retail to 20% capacity and closes amusement parks, hotels, zoos and aquariums.

California theme parks are unlikely to return to full operation until early 2021 or next summer under COVID-19 health and safety reopening guidelines issued by the state. Many of the state’s theme parks have partially reopened without rides for shopping, dining and special events.

What do the new stay-at-home orders mean for California theme parks?

Is Knott’s Berry Farm offering outdoor dining or takeout at the Taste of Merry Farm tasting event? What happens to theme parks that reopened as zoos and aquariums? Is the Holiday in the Park Drive-Thru Experience at Six Flags Magic Mountain considered a large gathering if everyone stays in their cars?

The stay-at-home order would have little impact on retail restrictions — reducing capacity limits from 25% to 20% in most of the state. But would it be worth keeping Downtown Disney and Universal CityWalk open without outdoor dining?

Sit-down restaurants like Carthay Circle Lounge in Disney California Adventure and Ballast Point Brewing in Downtown Disney would have to stop offering outdoor dining under California’s stay-at-home order. But would they offer takeout?

Black Tap Craft Burgers & Beer and Ralph Brennan’s Jazz Kitchen have takeout windows for CrazyShakes and beignets. But if Downtown Disney visitors sit down to eat is that considered outdoor dining?

Mrs. Knott’s chicken dinner restaurant offers curbside pick-up and carry-out — if and when outdoor dining is banned in Orange County.

Legoland California expects to cease the Holidays at Legoland dining and retail experience once the guidance is implemented across the state, Legoland officials said.

The Knott’s Berry Farm Hotel and the Legoland Hotels would have to close under the state’s stay-at-home order — unless they were housing critical infrastructure support personnel.