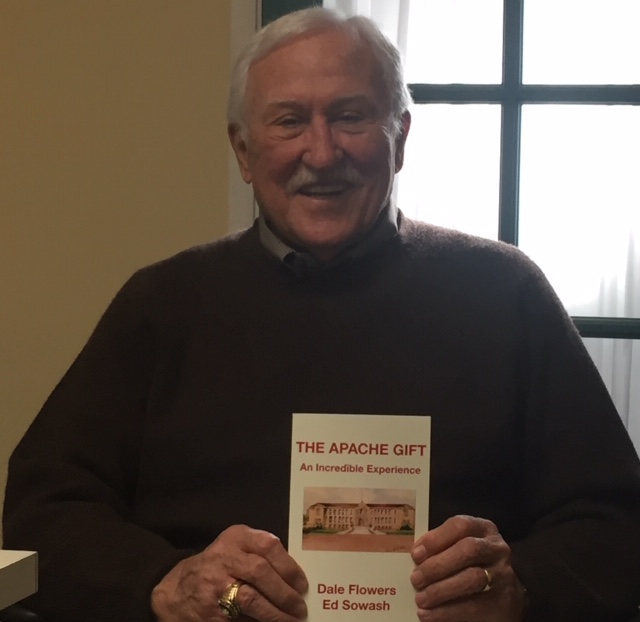 To say that the 1954 Vallejo High football team is the most accomplished in school history is an understatement.

Consider this — the Apaches were mentioned by Sports Illustrated as possibly the best team in the nation that year. Furthermore, five players from that team went on to play in the NFL, led by legendary running back Dick Bass. Mark Tennis of CalHiSports.com once listed that team as the No. 2 greatest high school team in the history of California, trailing only the 2001 De La Salle squad.

To make sure that team’s legend never dies, authors Ed Sowash and Dale Flowers published “The Apache Gift: An Incredible Experience,” dedicated not only to that particular group but to the years leading up to that perfect campaign.

Sowash said about 10 years ago, he contacted friend Jerry Strong about writing the book. Strong was willing, had done a number of interviews and even wrote two chapters. Unfortunately, Strong was going blind and could not continue. Sowash contacted longtime Vallejo Hall of Fame biography writer Jim Hunt, but Hunt passed away in 2016.

Finally, he asked Flowers to write it and Flowers suggested the two work on the project together. Since the coronavirus pandemic was keeping everyone inside, Sowash said it was a perfect time to write.

“It took us eight months to put it together, which is pretty fast,” Sowash said. “It was a great time since we couldn’t really do anything else. We’d talk on the phone for about four hours a day and email. We did everything like that. I actually haven’t seen him face to face in over a year. At one point, we toasted with glasses of champagne and we even did that over FaceTime.”

Sowash said the book was based on research from the library, about 54 different interviews as well as their own recollection of events. Sowash said of the starting 11, six men have passed away.

The book’s story starts in 1951 when all of the players started to play football for the first time in three junior high classes. Back then, junior high was comprised of grades seven through 10 and high school was for juniors and seniors only.

The book also goes into great detail about each victory that season, including a 39-7 win over Santa Rosa to clinch the North Bay League title. A year earlier, the two teams tied 7-7, the only blemish on the high school careers of players like Sowash, Bass and D.L. Hurd.

The authors also give tribute to the coaches who helped guide the talented and dedicated group to a perfect season.

Sowash said through the interviewing process, he learned a few things but also was able to confirm a number of other facts.

“I don’t think there were any big surprises,” he said. “But it was nice to hear from (those people) because they are a good audience too because they’ll buy a book to see their name in print.”

Sowash said there were no arguments between him and Flowers until …

“When we were finished, we couldn’t decide on a title,” he said. “Oh my God .. we had a couple of days of arguments on the phone, and the book was written.”

Finally, the two agreed on “The Apache Gift.”

“It was kind of a long time coming,” Sowash said about the process. “If (readers) were part of Vallejo, or even Santa Rosa … or even connected to sports, they’re going to be interested to know what kind of success happened here.”

The book can be purchased through Amazon as well as the Vallejo Historical Museum book store and The Alibi Book Store, which are both on Marin Street in Vallejo.